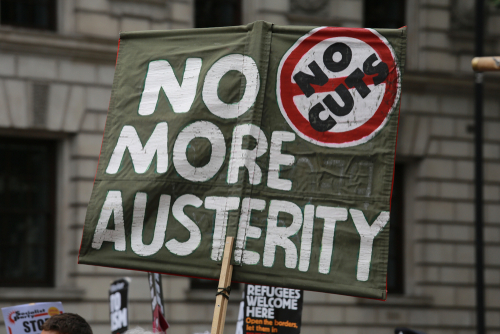 In many advanced countries, the parlous condition of public hospitals – due largely to inadequate funding – has been thrown into sharp relief by the coronavirus crisis. The United States, France and the United Kingdom are extreme examples. In these and other countries, many public hospitals were grossly stressed even before the pandemic, with patients waiting for hours in corridors, medical staff burnt out from constant overwork, shortages of supplies, and no spare capacity to absorb shocks such as the pandemic itself.

Healthcare is not the only area of public spending which has been under acute strain in recent years. Infrastructure, education and defense are other examples of areas which have been under great pressure in many countries. Low levels of government capital expenditure and maintenance have led to increasingly grave infrastructure deficits. Defense budgets have been under so much pressure in countries such as Germany that soldiers are undertrained and many military assets such as tanks are out of action because even basic maintenance has not been carried out.

The pressure on public spending has been palpable. But what has caused this? For many, the answer is simple: the policy of austerity implemented in the wake of the global financial crisis of 2007-08. They believe that governments have, over the past decade, cut total expenditure significantly in order to reduce their budget deficits, and that this is what has led to the intense pressure on public hospitals and other vital services.

There is one small difficulty here – namely, that this is not actually true. This can be seen by comparing pre-pandemic levels of government expenditure/GDP with those which prevailed prior to global financial crisis (i.e. 2019 or 2018 versus 2007). Expenditure/GDP was appreciably lower in only two of twenty-one major advanced OECD countries – Ireland and Israel. In all the others, government expenditure/GDP was either approximately the same or somewhat higher. (Note to economists: this is true irrespective of whether one looks at “raw” expenditure figures, or at cyclically adjusted expenditure.)

In France, for example, expenditure/GDP was – depending on the expenditure measure which is used – at least 1.5 percent of GDP higher in 2019 than it had been in 2007 – notwithstanding the constant carping about the alleged impact of austerity on public services that one hears in that country. Even in the United Kingdom, where the Cameron conservative government undertook major fiscal consolidation measures after 2010, public spending was no lower in 2019 than it had been in 2007.

All of the focus on “austerity” as the cause of budgetary strain distracts attention from what in fact has been the dominant source of budgetary stress. This is the powerful structural tendency of health expenditure and age pension expenditure to rise over time. Increases in spending have been so large in these areas that – in the absence of commensurate tax rises – they have put an enormous pressure on virtually all other areas of government spending. This is shown in detail in my book Bigger Government: The Future of Government Expenditure in Advanced Economies.

Health budgets have increased significantly over the past decade almost everywhere. Even in the United Kingdom, where the budget pressure on the National Health Service has been extreme in recent years, government health spending was in 2019 (at 7.5 percent of GDP) appreciably larger than it had been in 2007 (6.1 percent of GDP). The problem facing public hospitals has not generally been the consequence of cuts in funding, but rather that funding increases have not kept pace with large increases in the demand and cost of medical services.

Looking at public expenditure statistics the wrong way can obscure this important point. If we were to compare government spending levels in 2019 with those of, say, 2010 or 2012, we would come away with the impression that spending levels have indeed been cut quite substantially. But this would be entirely misleading. Government spending increased significantly in response to the global financial crisis, but in the form of temporary increases – in broadly the same way that there has been a big surge in temporary spending in response to the pandemic. This included increased outlays on unemployment benefits, discretionary financial support for businesses and spending on public investment projects. This temporary spending endured for some years in the wake of the financial crisis and was, in total, quite large. But if we want to understand underlying spending trends, we need to set this to one side.

Does this mean that “austerity” is a myth? Absolutely not. For those of us who are broadly Keynesian – including myself – there is a quite separate point. This is that the temporary spending implemented after the global financial crisis, which was essential to supporting the economy and promoting recovery, was generally insufficient and it was withdrawn to rapidly. Governments were by and large too quick to act to bring down deficits after the GFC. The consequence was that recovery was much slower than it should have been. In some European countries, recovery from the GFC was arguably incomplete even ten years later, just before the pandemic.

It is also important to acknowledge that if we look back further into the past – broadly, three or four decades back – there were indeed important periods when public spending/GDP was indeed cut significantly in many advanced countries. However, even then, these cuts in total spending were not by any means the only reason that many areas of public services were under intense pressure. Even then, the powerful upward pressure of healthcare spending and, increasingly, age pension spending was working to place considerable pressure on budgets as a whole.

And of course, there is the quite separate point that bailout countries like Greece (not an advanced country) and Ireland have indeed experienced very large spending cuts over the past decade. But it is absurd to draw a parallel between the swingeing cuts implemented in these countries and the budgetary policy in most advanced countries.

Focusing unduly on austerity as the source of pressure on government budgets in advanced countries generally in recent years is dangerous because it promotes the belief that, if we were to just stop obsessing about government deficits and debt levels, difficulties funding healthcare and other vital services would evaporate. But it is one thing to argue for more economic stimulus and a more relaxed view of deficits during an economic crisis – and an entirely different thing to argue that governments can and should run large deficits all the time. To do so would be both dangerous and irresponsible.

The reality is that given the magnitude of the spending pressures on government budgets in the coming decades, the solution is not to be found simply in running large deficits. A hard choice must be made – higher taxes, or major compensatory spending cuts elsewhere. There is no magic easy solution to this dilemma.

Detailed statistics and other evidence of the budgetary pressure of recent years are presented in chapters 1 and 10 of my book Bigger Government.